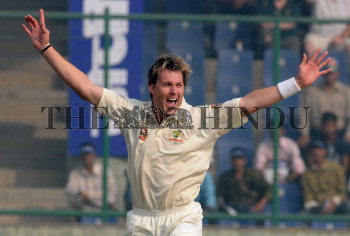 Caption : NEW DELHI, 29/10/2008: Australian bowler Brett Lee appeals successfully for an lbw decision against Indian batsman Virender Sehwag (not in pic) on the first day of the third cricket Test match of the Border-Gavaskar Trophy Test series at the Ferozeshah Kotla ground in New Delhi on October 29, 2008. Photo: S. Subramanium