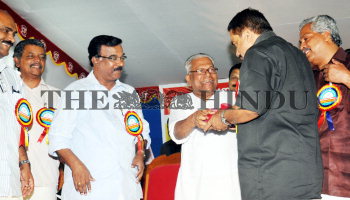 Caption : THIRUVANANTHAPURAM, 28/10/2008: Chief Minister V.S. Achuthanandan handing over the keys of the houses constructed by the Housing Board to Revenue Minister K.P. Rajendran, in connection with the tsunami rehabilitation project, at Beemapally in Thiruvananthapuram on October 28, 2008. State Ministers S. Sarma, C. Divakaran and Benoy Viswom are also seen. Photo: C. Ratheesh Kumar