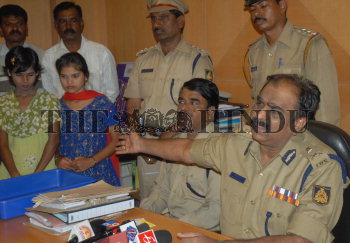 Caption : BANGALORE, 28/10/2008: The city police claimed to have busted a racket that habitually robbed the well-heeled, after laying traps using women as bait, and arrested six persons in connection with the racket. While cracking the case, there were two minor girls, allegedly kidnapped by the gang members from West Bengal. Police Commissioner Shankar Bidiri with the children rescued by Sampige Halli police and brought to Police Commissioner's office in Bangalore on October 28, 2008. Photo: K. Gopinathan