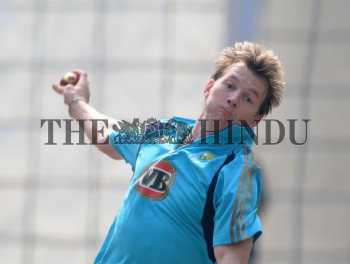 Caption : NEW DELHI, 26/10/2008: Australia's Brett Lee bowling at the nets during a practice session at the Ferozeshah Kotla ground in New Delhi on October 26, 2008 ahead of the third cricket Test between India and Australia for the Border-Gavaskar Trophy. Photo: S. Subramanium