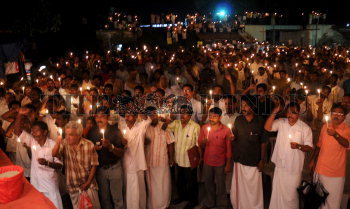 Caption : Kochi: The massive crowd that participated in the rally taken out by the CPI (M) to the Southern Naval Command on Friday, to protest against the Indo-US joint-Naval exercices off India's western coast. Photo:Vipin Chandran