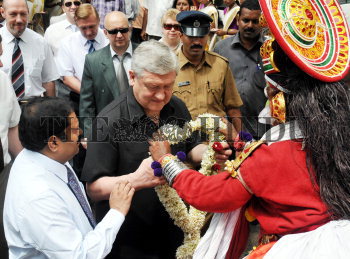 Caption : THIRUVANANTHAPURAM 23/10 2008------ Traditional welcome: Russian Ambassador to India Vycheslav I. Trubnikov being received at the Honorary Consulate of the Russian Federation which was inaugurated in Thiruvananthapuram on Thursday. First Honorary Consul of the Russian Federation in Thiruvananthapuram Ratheesh C. Nair (left) looks on. Photo:C_Ratheesh kumar