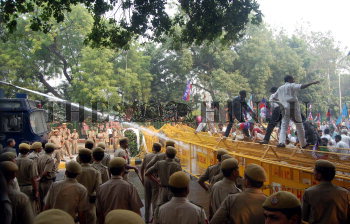 Caption : NEW DELHI, 21/10/2008: Members of Lok Janshakti Party clash with police personnel during a demonstration at Jantar Mantar against the attack on north indians in Maharashtra in New Delhi on October 21, 2008. Photo: V.Sudershan