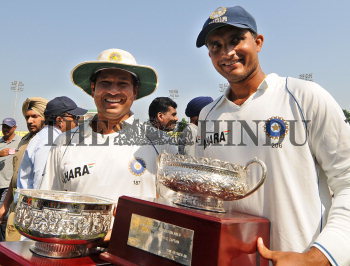 Caption : MOHALI, 21/10/2008: India's Sachin Tendulkar, who became the highest run-getter in Tests and Sourav Ganguly (right), who reached the landmark of 7000 runs in Tests, pose with their respective trophies at the presentation ceremony after India won the second cricket Test match against Australia at the PCA Stadium in MOHALI on October 21, 2008. Photo: S. Subramanium