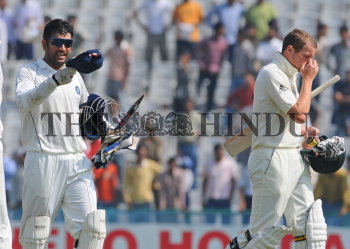 Caption : MOHALI, 21/10/2008: Mahendra Singh Dhoni (left) picks up a stump as souvenir after India won the second cricket Test match against Australia at the PCA Stadium in Mohali on October 21, 2008. Australia's Peter Siddle, who remained not out, is also seen. Photo: S. Subramanium