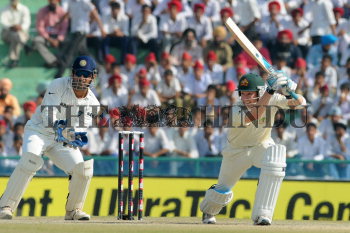 Caption : MOHALI, 21/10/2008: Australian batsman Michael Clarke plays a shot to the fence, watched by Indian wicketkeeper Mahendra Singh Dhoni, on the fifth and final day of the second cricket Test match of the Border-Gavaskar Trophy Test Series at the PCA Stadium in Mohali on October 21, 2008. Photo: S. Subramanium