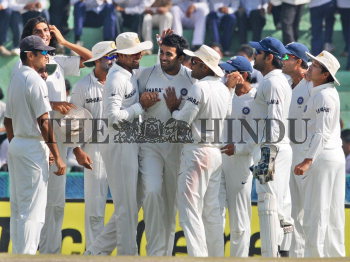 Caption : MOHALI, 21/10/2008: Indian speedster Zaheer Khan celebrates with teammates after getting the wicket of Australian batsman Brett Lee on the fifth and final day of the second cricket Test match of the Border-Gavaskar Trophy Test Series at the PCA Stadium in Mohali on October 21, 2008. Photo: S. Subramanium