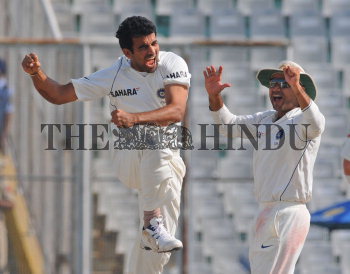 Caption : MOHALI, 21/10/2008: Indian bowler Zaheer Khan jumps to celebrate the wicket of Australian batsman Cameron White (not in pic) as Virender Sehwag looks on during the fifth and final day of the second cricket Test match of the Border-Gavaskar Trophy Test Series at the PCA Stadium in MOHALI on October 21, 2008. Photo: S. Subramanium