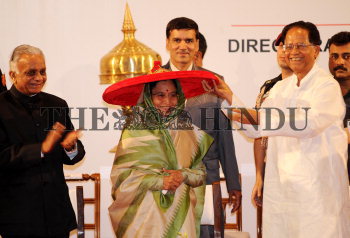 Caption : GUWAHATI„19-10-2008 : (PRESIDENT PRATIBHA PATILŌS NE VISIT) President of India Pratibha Patil being welcomed by the Assam Chief Minister Tarun Gogoi and Governor of Assam Shiv Charan Mathur (in left) with traditional Assamese "Japi" during the Fakhruddin Ali Ahmed award function for 2006 and 2007 in Guwahati on Sunday, October 19, 2008. Journalist Shekhar Gupta has been selected for the Fakhruddin Ali Ahmed Award 2006 and film actress Shabana Azmi has been named for the award in 2007. During her five day long northeast visit Patil will pay three day visit to Assam and two day to Meghalaya. PHOTO: RITU_RAJ_KONWAR