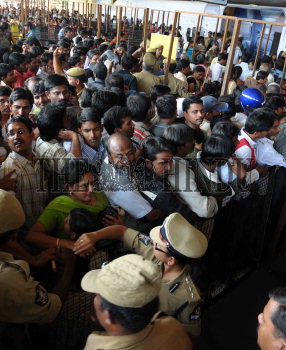 Caption : HYDERABAD, 18/10/2008:. Policemen preventing visitors from buying tickets after the counters were closed for brief time at the grand finale of country's first edition of "India Aviation 2008", at Begumpet Airport in Hyderabad on October 18, 2008. The exhibition was the first international exhibition of its kind in India that concluded as unexpected visitors were fascinated to watch worldâs most advance commercial aircrafts parked on tarmac. Photo: Mohammed Yousuf