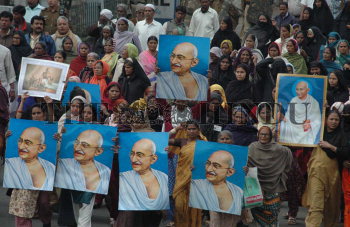 PROTEST RALLY ON THE EVE OF BHOPAL GAS DISASTER AN

Caption : On the eve of 22 anniversary of Bhopal Gas Disaster, Gas Victims under the banner of 'Bhopal Gas Peedit Mahila Udyog Sangathan', taking march with the portrait of Mahatma Gandhi, to Raj Bhawan in Bhopal on December 2, 2006 for demanding clean drinking water, better medical facilities, employment and capital punishment to the accused of Gas leak disaster including former Union Carbide Chairman Warren Anderson. Photo by A_M_Faruqui