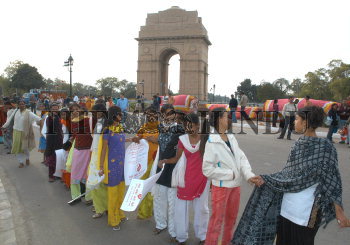 Caption : Several students, community leaders and social activists form a human chain during a rally at India Gate, in remembrance of One Crore females India has lost through sex selective abortions over the last 20 years. As part of CSR campaign "Meri Shakti Meri Beti" to sensitise Indian society to the problem of sex selective abortion (SSA), a campaign has been launched to help combat the problem by encouraging student activism as well as community mobilization on this issue. They also staged a street play at the lawns of India Gate, in New Delhi on December 02, 2006. Photo : Shanker Chakravarty