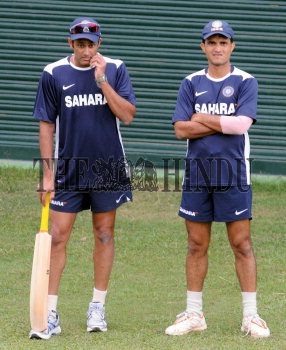 Caption : MOHALI, 16/10/2008: Indian captain Anil Kumble (left) seen with teammate Sourav Ganguly during the practice session on the eve of the second cricket Test match against Australia at the PCA Stadium in Mohali on October 16, 2008. Photo: S. Subramanium