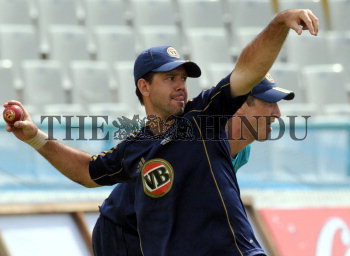 Caption : MOHALI, 16/10/2008: Australian captain Ricky Ponting throws a ball as Brad Haddin (partly seen) looks on during the practice session on the eve of the second cricket Test match against India at the PCA Stadium in Mohali on October 16, 2008. Photo: S. Subramanium