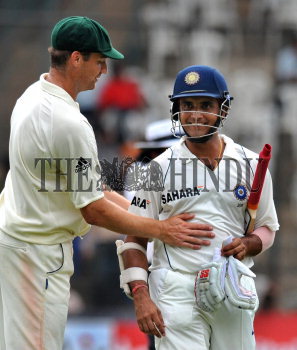 Caption : Bangalore: Indian batsman Sourav Ganguly being greeted by Australia's Stuart Clark during the first Test match of the Airtel Border Gavaskar Trophy between India and Australia at Chinnaswamy Stadium in Bangalore on October 13, 2008. Photo:K.R. Deepak