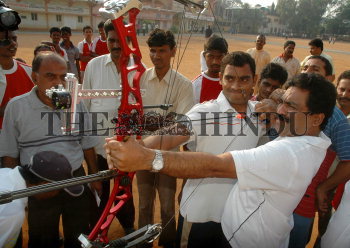 Caption : VIJAYAWADA(AP) WEDNESDAY, 15-10-2008: Andhra Pradesh Olympic Association president and MP Lagadapati Rajagopal aims his target with the bow of a professional archer at IGMC Stadium in Vijayawada on the occasion of felicitation to him on being elected as associate vice-president of Indian Olympic Association on October 15, 2008. PHOTO: RAJU_V.