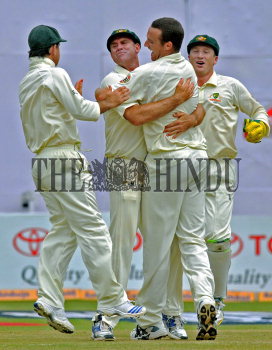 Caption : BANGALORE, 13/10/2008: Australian bowler Stuart Clark (second from right) hugs Matthew Hayden for taking a catch to dismiss Indian batsman Virender Sehwag (not in pic) as Ricky Ponting (left) and wicketkeeper Brad Haddin rush to greet them during the final day of the first cricket Test match of the Airtel Border-Gavaskar Trophy Test Series at the M. Chinnaswamy Stadium in Bangalore on October 13, 2008. Photo: K.R. Deepak