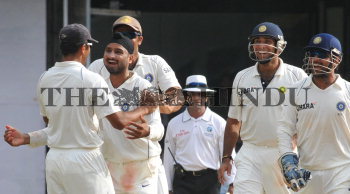 Caption : Bangalore - 12/10/2008: Indian bowler Harbhajan Singh celebrates with teammates after taking the wicket of Australian Cricketer Mike Hussy during the fourth day of the first cricket Test match of the Airtel Border Gavaskar Trophy between India and Australia at M. Chinnaswamy Stadium in Bangalore on October 12, 2008. Photo: Bhagya Prakash K