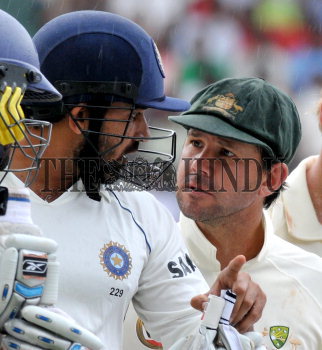 Caption : BANGALORE, 11/10/2008: Indian batsman Zaheer Khan complaining to Australian captain Ricky Ponting about an argument with Brad Haddin on the third day of the first cricket Test match of the Airtel Border-Gavaskar Trophy at the M. Chinnaswamy Stadium in Bangalore on October 11, 2008. Photo: K.R. Deepak