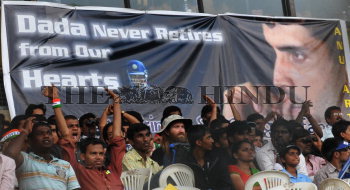 Caption : BANGALORE, 09/10/2008: Fans put up a banner on Sourav Ganguly inside the Chinnaswamy Stadium after he announced his retirement during the Border-Gavaskar Test Series between India and Australia in Bangalore on October 09, 2008. Photo: K. Bhagya Prakash