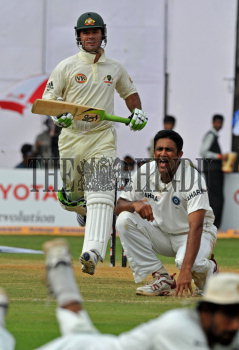 Caption : Bangalore:09/10/2008: Australian Captain Ricky Ponting runs between the wickets during his century knock as Indian captain Anil Kumble reacts on the first day of the first Test match of the Airtel Border Gavaskar Trophy at M. Chinnaswamy Stadium in Bangalore on October 9, 2008. Photo:K.R. Deepak