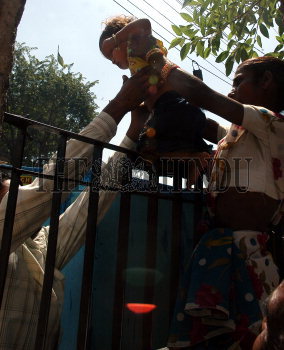 Caption : HYDERABAD, 29/09/2008: A woman hands over her sick baby to a relative at the Osamnia General Hospital in Hyderabad on September 29, 2008.. Owing to the Government doctors' strike in the city, the baby and his mother were stranded inside the hospital premises when the gates were closed. Patients complained of several hardships they were facing because of the ongoing strike. Photo: Nagara Gopal