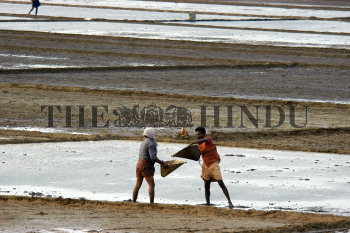 Caption : A farm worker sowing paddy seeds at a paddy field near Thrissur, Kerala. Hybrid rice seed production, which in itself is highly remunerative besides providing enormous employment and income generation to the farming men and women, has contributed much to the growth of the seed sector in the country. Area under hybrid rice has increased from 10,000 hectares in 1995 to more than 7,50,000 hectares in 2005 and the seed production too has increased from a mere 200 tonnes to 12,000 tonnes more than 95 per cent of the hybrid seed production is nurtured by the private sector. Photo: K.K. Mustafah 30/11/06