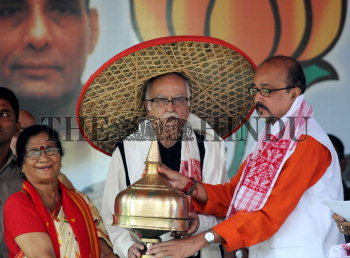 Caption : GUWAHATI, 28/09/2008: BJPās prime ministerial candidate and leader of opposition in Lok Sabha L.K.Adavani WELCOMEd by a traditional Assamese 'Japi' while addressing a public rally in Guwahati on September 28, 2008. The former deputy prime minister of India is also scheduled to address a public rallies in Shillong capital of Meghalaya state on September 30th to sound poll bugle for the upcoming Lok Sabha election. The recent e-mail threatening by Mominul Haque, poising himself to be an Indian Mujahiddin terrorist from Shillong threatened to blow up Advani on his arrival. But later he was tracked and apprehended before being remanded to 14 days police custody. Advani also hold a brain storming meeting with the main opposition party Asom Gana Parishad (AGP) leaders to formally forge an electoral alliance for the Lok Sabha poll which is round the corner. The seat sharing deal could help AGP victory riding piggyback on help from BJP. Photo: Ritu Raj Konwar