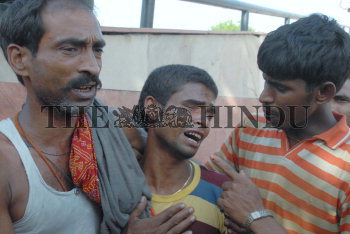 Caption : NEW DELHI, 27/09/2008: Anguished relatives of nine-year-old Santosh outside the AIIMS Trauma Centre in New Delhi on September 27, 2008. Santosh was killed in the bomb that exploded in the crowded Mehrauli area in South Delhi. Photo: Kamal Narang