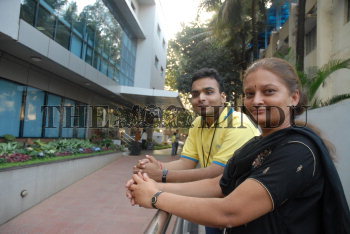 Caption : Infosys employees RANJINI Ramanujam and Ankit Jindal who are partially hearing impaired and partially visually impaired respectively during an interaction at the Infosys BPO Campus in Bangalore on November 28, 2006, on the eve of World Disability Day. Photo: K. Gopinathan