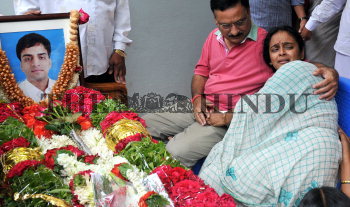 Caption : Bangalore - 11/09/2008: M. Anantha Padmanabha (left) and M. Asha Ananth (2nd left) parents of Traine Piolet Ananth Akash greving at their residence in Bangalore on the death of their son who was killed in Air Crash in Australia on September 11, 2008. Photo: V_Sreenivasa_Murthy.