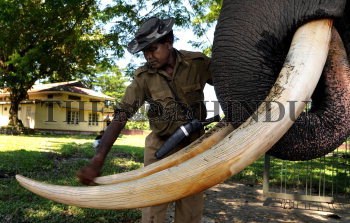 Caption : KAZIRANGA 08-09-2008 : (KAZORANGA FLOOD) A Mahout prepares his tusker for a search operation to find out the dead animals in Kaziranga National Park on September 08, 2008. As the waters began to recede the authorities have decided to launch a combing operation to carcasses of animals that may have strayed out side during the floods in Kaziranga. All the range officials have been asked to scan the park on elephants, boats and on foot for animal carcasses for a correct estimate of the death toll. Eight deer and three Rhino calves have so far died in recent wave flood in Kaziranga. A World Heritage Site, the Kaziranga National Park shelters about 15 species of Indiaâs threatened mammals, including one-horned rhinoceros, wild buffaloes, Indian elephants and Royal Bengal tigers. The park has the worldâs largest population of one-horned rhinoceros. PHOTO: RITU_RAJ_KONWAR