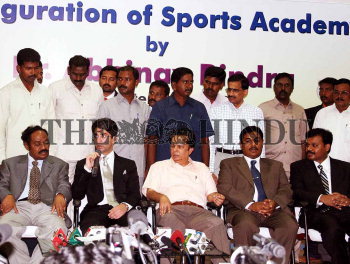 Caption : TAMBARAM, 07/09/2008: Olympic Gold Medallist Abhinav Bindra (second from left) speaking to reporters during the fourth convocation of SRM University in Kattankulathur on September 07, 2008. He was conferred the honorary Doctor of Literature and he inaugurated the SRM Sports Academy on the occasion. Others present are (from left) T.R. Pachamuthu, Chancellor, G. Madhavan Nair, Chairman, Indian Space Research Organisation, who was conferred with the honorary Doctor of Science on the occasion, P. Ravi, pro-chancellor and P. Sathyanarayanan, vice-chancellor. Photo: A. Muralitharan