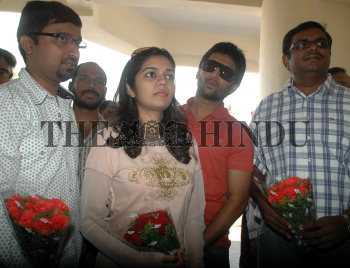 Caption : VIJAYAWADA, 02/09/ 2008: (from left) 'Ashta Chemma' director Indraganti Mohana Krishna, actors Swathi, Nani and producer P. Rammohan pose for lensmen before the screening of a premier show of the movie in Inox theatre in Vijayawada on September 02, 2008. Photo: V. Raju