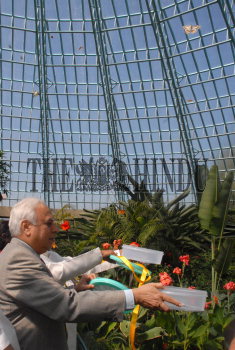 Caption : Releasing the butterflys to inauguration of Butterfly Park by Union Minister for Science and Technology Kapil Sibal and Karnataka Minister for Forest Chennigappa at the Bannerghatta Biological Park, in Bangalore on November 25, 2006. Photo: K. Gopinathan