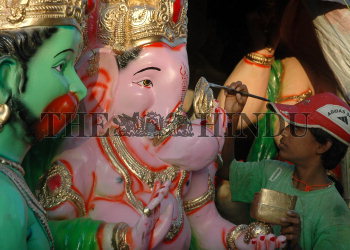 Caption : VIJAYAWADA, 29/08/2008: With Ganesh Chaturthi is less than a week away, finishing touches are being given by the boys to the idols of Vinayaka at Krishnalanka, in Vijayawada on August 28, 2008. Photo: V. Raju