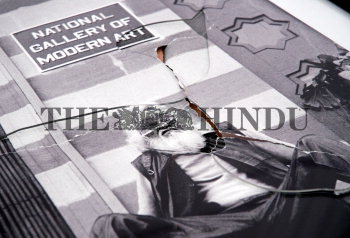 Caption : NEW DELHI, 24/08/2008: An Exhibition of paintings by M F Hussain after it was vandalised by alleged members of an out fit named ' Shri Ram Sena' outside the SEHMAT office, it was put up paralell to the India Art Summit 2008 fair which excluded works of MF Hussain in New Delhi, on August 24, 2008. Photo: V.V. Krishnan