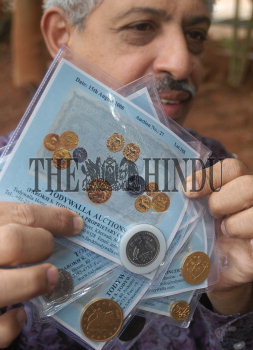 Caption : BANGALORE, KARNATAKA, 13/08/2008: Mr Farokh S Todywalla displaying a 1960 one rupee coin, mughal gold coin of 11 gms with other coins at a press conference in Bangalore on August 13, 2008. These coins estimated to sell for over Rs 2 lakhs each at the auction of over 320 gold coins including rare 2000 year-old coins and rare early Indian bank notes . Photo: G.R.N. Somashekar