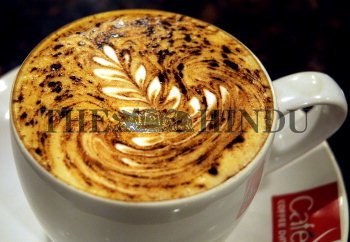 Caption : HYDERABAD:12/08/2008:Ah, coffee! The brew that cheers, coffee is displayed before being served at a Cafe Coffee Day outlet at Filmnagar in Hyderabad. Presentation is an integral part of coffee house service, as illustrated by the fancy design layered into this..Coffee is a widely-consumed stimulant beverage prepared from roasted seeds, commonly called coffee beans, of the coffee plant. Coffee was first consumed in the 9th century, when it was discovered in the highlands of Ethiopia and it spread to Egypt and Yemen, and by the 15th century had reached Armenia, Persia, Turkey, and northern Africa. From the Muslim world, coffee spread to Italy, then to the rest of Europe, Indonesia and the Americas. Today, coffee is one of the most popular beverages worldwide. Photo: Mohammed_Yousuf