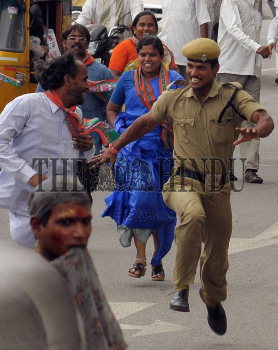 Caption : HYDERABAD 12/08/2008: A lone police jawan chasing nearly half a kilometer to detain an activist of Bharatiya Janata Party during a protest near Raj Bhavan road in Hyderabad on August 12, 2008. The protest organized against the Kashmir government for backing down from transferring forest land to a shrine trust.Photo:Mohammed_Yousuf