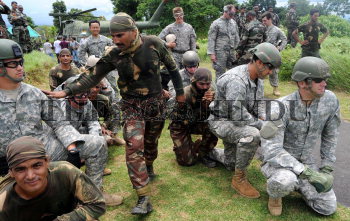 Caption : MIZORAM 11-08-2008: (US SPECIAL FORCES UNDER GOING JUNGLE WARFARE TRAINING IN MIZORAM) American Special Forces personnel under going jungle warfare training at the specialised counter-insurgency range of the Indian army's famous Counter-Insurgency and Jungle Warfare School (CIJW) in Vairengte in Mizoram on August 11, 2008. A batch of 24 American Special Forces personnel is taking part in the 'Operation Vajraprahar' which is the fourth round of joint exercises between the special forces of the Indian and American armed forces. The focus of this joint exercise is to tackling terrorism in urban landscape, with the US forces drawing upon their experience in Afghanistan and Iraq and the Indian forces on their expertise in Jammu and Kashmir. The CIJW School, located at Vairangte in Mizoram is fast becoming famous across the world's armies. Apart from the US army, soldiers of different countries like Nepal, Bhutan, Bangladesh, Singapore and Afghanistan have trained in CIJW School in the recent past. PHOTO: RITU_RAJ_KONWAR