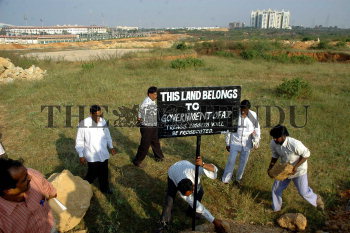 Caption : Officials led by Serilingampally Mandal Revenue Officer Madan Mohan Rao putting up notice board after taking back the 400 acres given by the erstwhile Telugu Desam Government to Florida-based IMG Bharata Academy in Cyberabad on November 21, 2006. The then Government had in 2004 alienated land in its favour at Kancha Gachibowli, village in Serilingampally Mandal for Rs. 50,000 an acre for a sports complex. The Congress Government then rescinded the sale and promulgated an ordinance taking back the land 450 acres near Shamshabad. The Company has threatened to sue the Andhra Pradesh Government for breach of contract in a London Court. ] Photo: Mohammed Yousuf