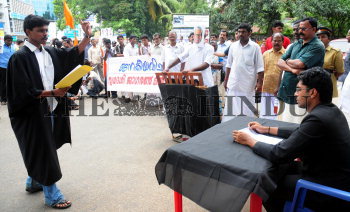 Caption : THIRUVANANTHAPURAM, 08/08/2008: A mock trail of Chief Minister V.S. Achuthanandan organised by the Swadeshi Jagaran Manch before the Secretariat in Thiruvananthapuram on August 08, 2008 to protest the Government's failure to close down the cola plant at Plachimada. Photo: S. Gopakumar