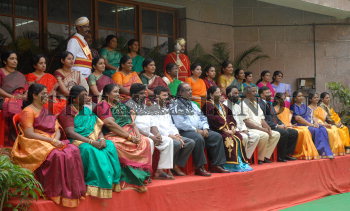 Caption : Wome Corporators with Bangalore City Mayor Mumtaz Begum and BMP Commissioner Jairaj posing for the photo along with the Outgoing corporators at the BMP head office in Bangalore, tomorrow is the last day of BMP Elected Corporators Photo: K. Gopinathan ( 21-11-2006)