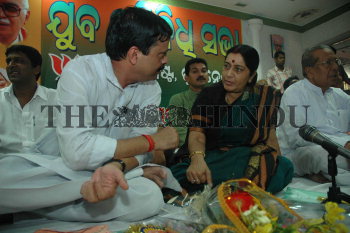 Caption : BHUBANESWAR, 06/08/2008: BJP leader Sushma Sawraj flanked by Biswabhusan Harichandan, minister for law and industries and others is conversing with state president Suresh Pujari in the gathering by party representatives of Orissa State Assembly constituencies to reinforce before election in Bhubaneswar on August 06, 2008. Photo: Ashoke Chakrabarty