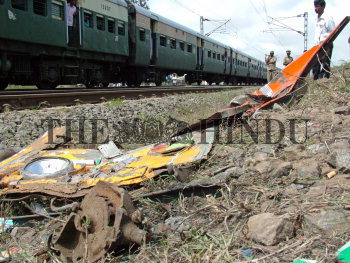 Caption : COIMBATORE, 05/08/2008: Damaged parts of the lorry that dashed against the Coimbatore - Mangalore passenger train strewed near the track at the Eachaneri level crossing in Coimbatore as another train passesby on August 05, 2008. The lorry driver and a passerby were killed and nine passengers in the train suffered injuries in the accident. Photo: K. Ananthan