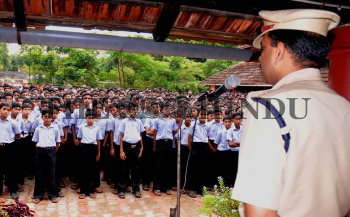 Caption : KOZHIKODE, 04/08/2008: DON'T WORRY WE ARE HERE: A police officer speaking to the students at the assembly of MCC Higher secondary school in Kozhikode on August 04, 2008 after the security search conducted at school by bomb squad After they got a hoax bomb call. Photo: S. Ramesh Kurup