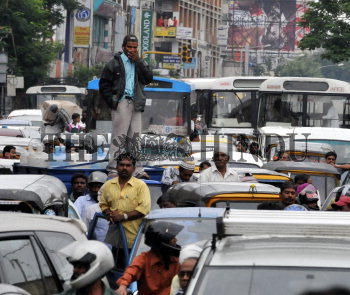 Caption : HYDERABAD, 26/07/2008: 'PLIGHT OF PEOPLE -MASSIVE TRAFIC JAM ON ABIDS ROAD' - A motorist watches from atop his vehicle , caught in a bind as road users waited for hours on end on the ABIDS Road in Hyderabad on July 26, 2008 as MIM activists staged a protest in front of the ABIDS Police Station after a clash with GHMC demolition squad at Chapel Road. Photo: P.V. Sivakumar