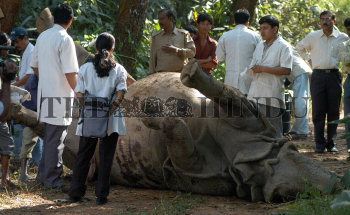 Caption : Zoo officials watching the body of the 50 year old one horned Rhino, Ganesh, at Zoological Park in Guwahati on November 19, 2006. Ganesh was the oldest one horn Rhino of Guwahati zoological park who was suffering from tuberculosis since last two years. He was brought from the world famous Kaziranga National park 24 years back which has the highest number of one horn Rhino (more than 2400) in the world. Photo: Ritu Raj Konwar