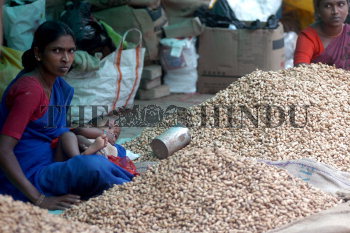 Caption : BANGALORE, KARNATAKA, 20/11/2006: The annual groundnut fair in Bangalore, generally held in the third week of November every year, will start on November 20, 2006. Groundnuts from all over South India, including Krishnagiri, Salem, Chittoor and neighbouring towns of Kanakapura and Magadi are pouring in. Thousands of people flock here to taste the variety (boiled, roasted and fried) of groundnuts being sold at Rs 10 per litre. Photo: G.R.N. Somashekar